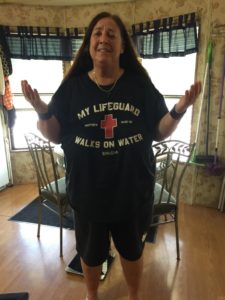 Dokimos Project graduate (2016) Terri Arana understands what God has called her to in this time. She says, “My assignment is to love people that most would pass by! The Holy Spirit gives me words to say and subjects to bring up in conversation. Sometimes He wants me to just give hugs, but most of the time He asks me to pray with people.” Terri recently gave us an example of what this looks like in her everyday life. One day, she was walking to her car when she heard a female shouting for help. Terri did not know where the shouting was coming from, but the Holy Spirit told her where to go. When she found the woman who was shouting, Terri learned that a man attempted to assault her. Two other men came to her rescue, but the situation was quickly becoming violent. Terri says, “The Lord sent me to the neighbor’s fence just big enough for me to see what was happening. I asked the Lord what He wanted me to do. Now, being a retired Peace officer, I have been in many fights before and handled these situations with yelling and cursing -- the old man. The Holy Spirit said, ‘say my name!’” Terri obeyed and began to speak the name of Jesus over the situation. She continues, “All of a sudden, with an authoritative voice, I spoke out God’s Truth and claimed them all for Christ Jesus. I cancelled the plans of the enemy in Jesus’ name! Miraculously, the dust settled, and there was peace. Praise God Almighty King Jesus! Amen! Hallelujah! No one was hurt in this Glory Story, not even the perpetrator!” If we take time to listen to what God is saying, and if we follow His direction, He will use us in many ways to spread His love and bring peace.