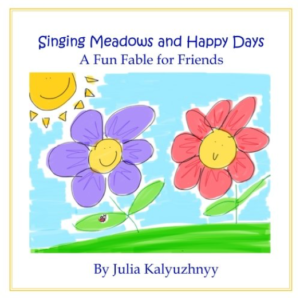 Dokimos graduate (2014) Julia Kalyuzhnyy has written her first children’s book called Singing Meadows and Happy Days: A Fun Fable for Friends. Julia wrote the book one night when she received a download from the Holy Spirit. She explains, “It was cool because the story just came to me in the middle of the night. I woke up at three in the morning, words started coming, and half an hour later I read it and it was a little story.” A week before a group from her church left for Mexico on a mission trip, Julia was invited to join. She felt led to go, and while she was making her plans, she asked her pastor if he thought it would be a good idea to bring copies of her book. The pastor said that it would mean a lot to the children to receive a book directly from the author herself. During her trip to Mexico, Julia says that she was given a supernatural ability to speak with the children, “I only had Spanish 1 ten years ago, and then again 5 years ago, but for some reason I was able to share the testimony of the story with the children. I was able to witness to them, pray with them, and encourage them all in Spanish.” She says that she wasn’t necessarily given new Spanish words, but that God brought all the words she was exposed to in school back to her mind and helped her use them to form sentences. Julia used her book and her Spanish to explain an important message to the children she was ministering to, “In Mexico, I told the children that I’m not an author, and I’m not really great at this stuff, but this book is a symbol of God’s power, and it’s a miracle in my life. I told them that I was giving it to them as a symbol. I wanted them to know that God can work in them, too.” Julia gives glory to God for working through her in this project, “It’s just a symbol of God’s grace and of Him calling us to places and asking us to do things that we never thought we’d be able to do.”

To buy a copy of Julia’s book, Singing Meadows and Happy Days, follow this link: